PM also inaugurated the Hindon Airport Civil Terminal and Dilshad Garden – Shaheed Sthal Section of Metro. The Prime minister himself took a ride on this metro.

Prime Minister Narendra Modi inaugurated and laid foundation stone of as many as 15 development projects in Kanpur including some under ‘Namami Gange’.

Addressing a public rally on the occasion PM Modi on Friday lashed out at those seeking clarity on the damage and casualties inflicted by Indian air strikes on a terror camp in Pakistan’s Balakot.

PM Modi said Islamabad itself had first tweeted about the air strikes and his government did not seek any credit for it. The Indian Air Force strikes followed the terror attack in Jammu and Kashmir’s Pulwama.

“Is Pakistan stupid to do this (tweet)? The 130 crore people of India are the proof. Please stop appeasing Pakistan,”  PM Narendra Midi told a rally in Ghaziabad, on the outskirts of Delhi. 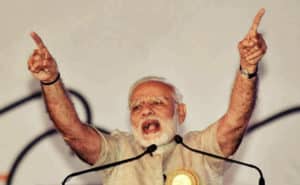 But the Prime Minister today dodged those questions and said he was voted to power since the previous government had “done nothing” after the Mumbai terror attack in 2008.

PM Modi initiated a number of development projects at Ghaziabad.

PM Modi also talked about how his government had worked towards the betterment of the economically weaker sections of the society.

“Lives of the poor and the middle-class people have been made easy. Our government is persistently making efforts towards that goal,” stated India’s PM Narendra Modi.