Bollywood actor Irrfan Khan shocked fans last year when he announced that he had to go to London for treatment of his neuroendocrine tumour.

After undergoing through the treatment for neuroendocrine tumour in London , was spotted at the Mumbai Airport early on Saturday. While it’s not yet known where he was heading towards but it’s certain that the actor is back in action.

Irrfan Khan avoided getting clicked by the paparazzi. He had his entire face covered with a hat and a muffler. But, a few camera men recognized him through his pink jacket. He did not wish to show his face so everyone respected his decision and did not take his face shots.

His arrival in February earlier this year had led to speculation that he will soon start shooting the sequel to ‘Hindi Medium’. However, a few others reported that he is being treated at a hospital here.

A spokesperson for Irrfan Khan disregarded the all the reports that stated that the actor will soon start shooting for ‘Hindi Medium 2’ and added that said that Irrfan may return to the country after Diwali. 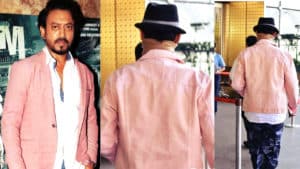 Irrfan first spoke about his health on March 5, when he confessed that he was suffering from a ‘rare disease’.

In June 2018, Irrfan Khan provided an update about his health in an interview to a tabloid. Irrfan stated that, this realisation made him surrender and trust the Universe, irrespective of the outcome, irrespective of where this takes him, eight months from now, or four months from now, or two years from now.. All his concerns took a back seat and started to dissolve and  went out of his mindspace. For the first time, he felt what ‘freedom’ truly means. It felt like an accomplishment for the bollywood actor Imran Khan. He stated that he felt as if he was tasting life for the first time, the magical side of of life.The Hindi medium star said, his confidence in the intelligence of the cosmos became  more absolute. He felt as if it has entered every cell of his body. The dynamic actor continues, “time will tell if it stays, but that is how I feel as of now”.