On Monday, intelligent sources told India that an undisclosed flying object from the Pakistani side crossed the Indian airspace near Bikaner.

Govt. sources said that on Monday, at Bikaner sector of the Indo-Pak border a fighter jet of the IAF (Indian air force) shoot down a Pakistani military drone using an air to air missile.  At around 11.30 AM, this Pakistani drone was shot down by a Sukhoi-30 and minutes after a ground-based radar section expose the flying machine.

Intelligent sources said that it was the 2nd abortive attack by Pakistan to send a secret service drone inside India in the last few days.

The military drone came in the midst of heightened tension between India and Pakistan after the IAF (Indian air force) struck a terrorist training camp in Pakistan’s Balakot.
This Pakistani drone was shot down by IAF on February 27 along Indo-Pak border.

On 14th February 2019, on the Jammu Srinagar National Highway, a convoy of vehicles was attacked by a vehicle-borne suicide bomber at Lethpora which is in the Pulwama district, Jammu and Kashmir, India. The attack resulted in the deaths of 40 CRPF personnel and the attacker also. This was planned by jaish-e-mohammed. 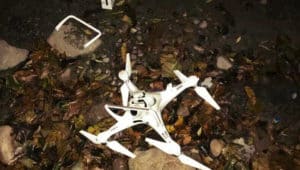 On February 26, Indian air force jets hit the jaish-e-mohammad (JeM) terror camp. Sources said on Monday that at the facility Indian intelligence agencies had found that more than 300 mobile phone was active and they giving a fair indication of the total number of patient housed there.

Sources said that on February 26, 12 IAF jets mirage 2000 entered in the Pakistani air spaced and launched 1000kg spice 2000 bombs at the camp in the Balakot, which housed commanders, terrorists and ammunition dump.

the main leader of the terrorist organization Jaish-e-Mohammed is  Masood Azhar, this organization is active mainly in the Pakistani Azad Kashmir. Masood azhar is the main culprit of Pathankot attack in India. Sources doubted that in February 26 air stick he also died in balakot but they are not confirmed about that.

Pakistan trying one after another to hit India but their plan failed every time.