The Haryanvi singer and dancer, Sapna Choudhary is on the headlines as the newest member of the Congress party. But in the interview, she has refused it and said that she is an artist and has not joined any political parties and will not campaign for any party in the upcoming Lok Sabha elections. She also said that every political party is equal for her and would let the media know if in near future she joins any.

Regardless of her statement, Congress sources have claimed her entry to the Congress party on March 23. There were reports of Sapna Choudhary getting formally invited into the UP Congress Committee chief, Raj Babbar’s residence.

There were speculations, earlier on Saturday, that Sapna Choudhary might be contesting the Lok Sabha elections from Mathura against MP of Bharatiya Janata Party, Hema Malini.

UP Congress Secretary, Narendra Rathihas confirmed the Haryanvi singer’s joining and even told that both Sapna and her sister have filled the Congress membership forms, where the form consists of Sapna’s picture along with her signature. 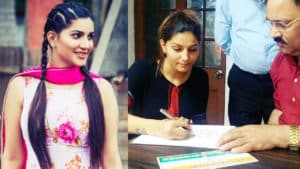 In addition to that, Raj Babbar, had posted a tweet with a picture of SapnaChoudhary along withthe Congress General Secretary, Priyanka Gandhi Vadra, welcoming her as the new Congress party member. The tweet read,”Sapna Choudhary jika Congress parivar mein swagat! ”.

When asked about the picture with Priyanka Gandhi, Sapna replied that it was an old one and has also denied to have met with Raj Babbar.

A quick glance about Sapna Choudhary

Born on December 25, 1990 in Rohtak, Haryana, Sapna Choudhary took up dancing as the means of livelihood when she was 12 years old, after the death of her father. She is one of the most popular artists in North India and has shot the limelight after the song, ‘Teri aakhya kayo kajal’. She has also been one of the contestants in Bigg Boss 11 and has made her Bollywood debut with an item number in the movie, ‘Veerey Di Wedding’.

Is the news of her, joining the political party, true? Well, that still remains under cover.