Congress leader Rahul Gandhi appointed his charismatic sister Priyanka Gandhi Vadra to a senior party position on Wednesday that officials say will energise the campaign to oust Prime Minister Narendra Modi in the national election expected in a few months.

Priyanka, 47, has campaigned for the Congress party in previous elections to help her brother, but largely stayed in the wings, letting her brother fully take the mantle of the Nehru-Gandhi dynasty that ruled India for most of its post-independence era.

Bearing a striking resemblance to her grandmother and former prime minister Indira Gandhi – who was known as “India’s iron lady” – Priyanka will be a Congress general secretary for Uttar Pradesh, the most populous state and key to the national poll.

“We will play politics on the front foot,” Rahul Gandhi told reporters. “I am very happy my sister, who is very capable, will work with me.”

Congress is trying to build an opposition alliance against Modi’s ruling Bharatiya Janata Party (BJP), which faces grumbling over a lack of jobs and a weak farm economy.

Modi remains the frontrunner, but his re-election is no longer assured after the BJP suffered a string of defeats in state elections last month.

Priyanka will oversee the eastern part of Uttar Pradesh, including the city of Varanasi, one of Modi’s political constituencies, the Congress party said in a statement.

“This will have an electrifying effect across the country, not just in Uttar Pradesh,” said Jitin Prasada, a Congress party leader.

Priyanka is seen as a more natural campaigner and a bigger draw than her brother, who appeared wooden during the last election. 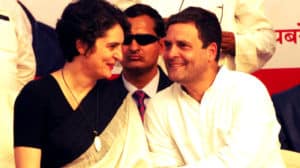 More recently, Rahul Gandhi has adopted a combative style, sniping at Modi with accusations over graft, abuse of power and a divisive brand of politics.

Priyanka’s entry into full-time politics could give more ammunition to Modi who has positioned himself as the son of an ordinary tea-seller against the dynastic politics of Congress.

“We want to congratulate the Congress party on this move. Basically, they are saying Rahul has failed, now they need his sister,” said BJP spokesman Sambit Patra.

Their grandmother, Indira Gandhi, succeeded him after a brief interval. After she was assassinated by her Sikh bodyguards in 1984, her son, Rajiv Gandhi, took over as premier.

Rajiv was killed by an ethic Tamil suicide bomber while campaigning for a general election in 1991.

Sonia Gandhi stepped back as her son took the reins of the party.

“There is a difference between Congress and the BJP. In the BJP the party is our family, whereas in Congress the family is the party,” said Patra.

Top Reasons Behind The Success of Real-Time Casino Gambling

Why Should You Join Betting And Gambling Websites?