The dollar rose on Monday as concerns grew that U.S.-China talks this week would not heal a rift over trade between the world’s largest economies.

The greenback is being lifted by its safe-haven appeal as investors, worried about a sharp global economic slowdown, pile into the world’s most liquid currency.

It is headed for an eighth consecutive day of gains.

U.S. negotiators this week will press China to reform how it treats U.S. companies’ intellectual property.

The high-level talks in Beijing are a leading focus for investors, many of whom see little prospect for a trade deal and instead expect an extension of the March 1 deadline for deciding whether to increase tariffs.

Emerging market and China-sensitive currencies such as the Australian dollar are most likely to be affected by developments in the trade dispute this week.

The strength in the dollar has emerged despite the Federal Reserve striking a cautious tone at its policy meeting in January.

“The U.S. currency is currently in demand as a safe haven. This is reflected in the fact that the Swiss franc and the Japanese yen – also typical safe haven currencies – have been able to appreciate in conjunction with the dollar since the start of the month,” said Thu Lan Nguyen, an FX strategist at Commerzbank in Germany. 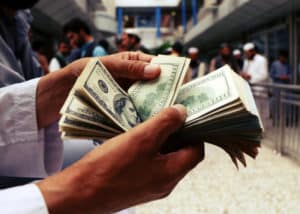 The dollar index, a gauge of its value versus six major peers, was marginally higher at 96.74.

Trump has vowed to increase U.S. tariffs on $200 billion worth of Chinese imports to 25 percent from 10 percent if the two sides cannot reach a deal.

On Monday morning, when China markets reopened after a one-week holiday break, the dollar was 0.5 percent higher versus the yuan at 6.7753 while the offshore yuan was relatively unchanged at 6.7808.

Philip Wee, currency strategist at DBS, expects the yuan to remain around 6.80 until there’s more clarity on how the U.S.-Sino trade dispute plays out.

The euro came under pressure as core European government debt yields touched their lowest in over two years. The single currency has lost 2.5 percent so far this month.

The European Commission on Thursday sharply cut its forecasts for euro zone economic growth for this year and next.