In a rather unusual event, a Chinese pilot named Weng Jiaqi landed in trouble after he was filmed taking a nap in the cockpit during a flight. The pilot has been punished as per the reports of South China Morning Post. The co-pilot of the flight has been punished as well for not waking the Jiaqi up.

The pilot is believed to be a senior in his position with an experience of over 20 years. He is with the China Airlines, which is Taiwan’s largest national aircraft carrier. He flew mainly to Tokyo, Okinawa, Seoul and Hong Kong, and was also a chief instructor at a flight training centre of the China Airlines. The co-pilot reportedly took the photos and videos which later came in the hands of Taiwanese broadcaster EBC and then became viral all over the world.

China Airlines however has issued a statement after seeing these videos and have reported in a statement to the ‘Daily Mail’ that the pilot had voluntarily reported for his inappropriate behavior. They also claimed that the Co-Pilot has also been reprimanded according to regulations and that Flight safety is of paramount importance to the Airlines. 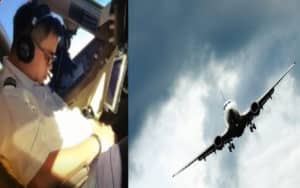 This incident comes round after a week-long strike was ended by the Airlines some days ago which was organized by the employees who highlighted the issue of fatigue and long working hours. This prompted the National Carrier to cancel more than 100 flights which affected more than 20000 passengers. The Guidelines of the Airlines mention that a pilot can take a nap in the longer flights, which has been dubbed as ‘controlled rest’, but the seat of the pilot needs to be pushed back and the pilot should not remain anywhere near the controls. The flight would be operated by the Co-pilot in that case. Taiwan’s Civil Aviation Bureau also states that a pilot, who has flown a long flight of 12 hours, is bound to have a rest period of 24 hours.

A similar incident happened last year, when a flight overshot its destination in Australia by almost 50 km after the pilot fell asleep in the cockpit.