A foot over bridge in Mumbai near Chhatrapati Shivaji Maharaj Terminus railway station collapsed on Thursday, 14th March, 2019. The over bridge provided a connection between the north-end of platform number one of the Chhatrapati Shivaji Maharaj Terminus and BT lane near the Times of India building. The collapse occurred at one of the busiest station at around 7:30pm while there was a huge rush going on the over bridge.

As per the reports of the Brihanmumbai Municipal Corporation, thirty-six people have sustained injuries, whereas at least five people have died in the collapse.

The injured people have been shifted to St. George hospital, Gokuldas Tejpal Hospital and Bombay Hospital for their treatment. 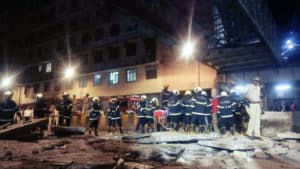 The chief minister of Maharashtra Devendra Fadnavis said that in a structural audit carried out last year the last year the bridge was found to be fit. He further added that if the bridge has still collapsed, it means that there was some error in the audit. The Chief minister has announced a compensation of Rupees 5 lakhs to the family members of the deceased and an amount of Rupees 50000 to those who have suffered injuries in the over bridge collapse.

FURTHER UPDATES ON THE OVERBRIDGE COLLAPSE