Veena Sendre is a transgender activist who came into the limelight by winning a beauty pageant. Then joined the Indian National Congress in Chhattisgarh on Sunday.

Veena Sendre had worked with a non-governmental organization and led the movement for gender equality. She was the first to win the Miss Transqueen title in 2018. She was crowned Ms Chattisgarh earlier in 2018. Miss Transqueen India is a beauty pageant for transgender people across the country. She had defeated Namita Ammu of Tamil Nadu to claim the title at the national-level beauty contest. The final of the beauty pageant was conducted in Mumbai, Monday. 8th October 2018. The aim of the pageant is to increase inclusion and acceptance of transgender people.

Veena belongs to Mandir Hasaud village of Raipur. She has participated in many fashion shows and also been part of Lucknow and Bengaluru fashion weeks. 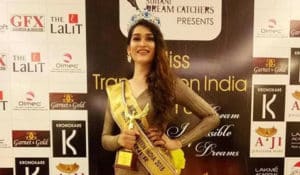 Veena has plans to go to Bangkok to participate in an international competition.  She has made the whole state proud. Heartiest congratulations to her,” the tweet further said “(translated to English)

Chhattisgarh Congress had also congratulated Ms. Sendre on joining the party. Chhattisgarh Chief Minister Bhupesh Baghel tweeted, “Miss India Transgender Veena Serde is going to participate in the international-level competition in Bangkok. She has not only made Mandir Hasaud proud but the whole state.”
In January this year, Congress had appointed Apsara Reddy as national general secretary of its women wing, All India Mahila Congress, making her the first transgender woman to be an office-bearer of the party. The journalist-turned-politician had been appointed to the post by Congress President Rahul Gandhi in the presence of Lok Sabha MP and AIMC President Sushmita Dev.