Akshay Kumar film Kesari is now in the center of discussion. The trailer of this film celebrates the bravery and heroism of the soldiers. In this film, the Sikh soldiers are cast and they defeated 10000 Afghans. The film showed the Saragarhi battle. In this trailer of the film, The Actor Akshay Kumar is not only fighting against Pathans but the trailer has established Kesari that is saffron color which denotes the sacrifice es and valor. British is included in this film.

Famous Actor Akshay Kumar portrays a havildar character named Isher Singh. The trailer begins with the conversation between a British Officer and the Havildar. British Officer has denoting our nation as the land of cowards, showing at the beginning of the trailers. This trailer makes a sensation to the movie lovers. An unseen technique of sword fighting, rustic war scenes, catchy dialogues have become very impressive to the spectators. Kesari that is saffron color which is indicating the sacrifice and courage, the Sikh soldier wore the saffron turbans and go in front of the enemy in the Warfield. Parineeti Chopra leads as a female, as shown in the trailer. In spite of looking helpless, Parineeti Chopra has filled with pride because of Akshay Kumar leads the Sikh soldiers into battle. 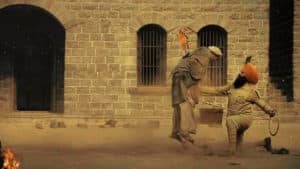 In the year 1897, a war happened between the Afgan tribesmen and British Indian army’s Sikh Regiment. The story of this film Kesari has taken from this incident. In this battlefield, around 10000 Afghans attacked a group of 21 Sikh soldiers from the British Indian contingent and they decided to fight against the huge group. This battle is considered the greatest last stands in history. Akshay leads the Sikh soldier’s group and decides to fight against the Afghans with not only their meager weapons but to establish their valor and courage.

The Actor shared three teasers of the film Kesari earlier to take attention of the movie lovers. These teasers have got a lot of applause to the spectators for its amazing music, captivating background and the actions scenes. The film will be in the hall on March 21.