Democrats now in control of the U.S. House of Representatives are working out which House panels will take the lead in investigating President Donald Trump’s business ties to Deutsche Bank, lawmakers and aides familiar with the plans told Reuters.

As the new Democratic House of Representatives majority launches a range of investigations into the Republican president and his businesses, the Intelligence Committee and Financial Services Committee are poised to dig into his ties with Deutsche, one of the world’s largest financial institutions.

Democratic lawmakers’ aides are discussing how to divide up the investigative work among committees and prevent overlap on requesting documents, aides said.

Since U.S. voters on Nov. 6 shifted majority control of the House from the Republicans to the Democrats, the party has been promising to probe the first two years of Trump’s administration and possible conflicts of interest presented by his hotel, golf course and other ventures, as well as Trump family members.

White House officials did not respond to a request for comment. The White House in the past has referred questions about Trump businesses to the Trump Organization.

Officials at the Trump Organization could not immediately be reached for comment. 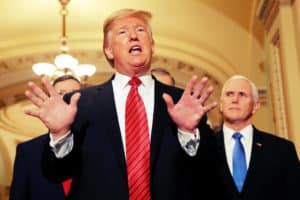 The Financial Services Committee, chaired by Democrat Maxine Waters, has the broadest power to look into Trump’s relationship with Deutsche.

When the Republicans still controlled the House, Waters tried in 2017 to request documents from the bank on its dealings with Trump and his businesses, as well as information about potential Russian money laundering through the bank.

But the bank told Congress that privacy laws prevented it from handing over such information without a formal subpoena. Committee Republicans ignored Waters’ request. As chairwoman, Waters can now issue subpoenas herself.

In recent weeks, Waters has been publicly quiet about her plans. In a speech on Monday on committee priorities, she made no mention of the bank. A Waters spokesman declined to comment.

Democratic aides outside the committee said Waters plans to move quietly on the Deutsche inquiry. She cannot begin formally issuing subpoenas until after the committee holds its first business meeting, expected by the end of January.

Deutsche has extended millions of dollars in credit to the Trump Organization, making the bank one of few willing to lend extensively to Trump in the past decade.

A Judiciary Committee spokesman said it has been consulted.