Recently, Zoya Akhtar’s film Gully Boy has become famous all over India, as it is one of the very first and best productions about rap artists to have been made in India. The previous entries in the field of rap history films featured either terrible rapping or worse lyrics, a fact that made many people wary of Zoya Akhtar’s ‘Gully Boy’, which stars in its lead role Ranveer Singh, one of the rising stars in Bollywood right now. After a sequence of film successes, Ranveer Singh signed on for Gully Boy, without listening to the warnings of others that this project could be disastrous. However, after its release, it became one of the most grossing films of February 2019, and indeed by far one of the most famous films of the year.

Indian Railways, the main Railway corporation in India, has jumped onto the bandwagon for supporting ‘Gully Boy’. In quite outspoken support of the film, Indian Railways released a version of a song present in the movie, Apna Time Aayega (a rap sequence in which Ranveer Singh amazed the world with his rapping capacity), instead dubbing their own version ‘Tera Time Aayega’. 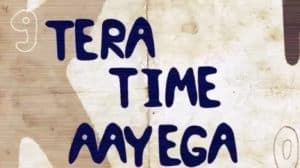 This version is meant to be a severe warning to the passengers who travel without tickets on trains, causing loss of profits to the rail company. Indian Railways faces this problem much more frequently than one could understand, since they face crores in lost income each and every month. The rail company urges people to not travel without tickets, and use the UTS app, or the Automatic Ticket vending machines present in railway stations to book their tickets.

The Railway Minister, Piyush Goyal, posted the rap song on the internet, a post that has, since then, managed to take the Internet by storm, as people around the country are made beware that Indian Railways will now take extra measures against them. Both Indian Railways, the Railway Minister, along with the more honest population of India, hope the video will prevent people from travelling on trains without tickets.