Smoking has always been one of the most controversial things in the world. Though the practice of smoking cigarettes started long ago, in the earlier, misty parts of the 1900s, smoking came under quite a lot of criticism when the 21st century began, as scientists around the world, after extensive testing, proved smoking to be one of the most effectives by which one could harm their lungs over a period of time. When one smokes, the capacity of the lungs to breathe efficiently is slowly reduced and harmed over time, and this can prove to be quite harmful for the body, as lots of impurities and harmful substances manage to slip through the purifying process of the lungs, due to the fact that the lungs are made slow by the effects of smoking. One of the most harmful facts about the practice of smoking is that it is very liable to cause skin cancer in the later parts of one’s life.

In a study that was financed the by Cancer Research UK, researchers found that smoking severely reduces one’s capability to fight against skin cancer, also known across the world as Melanoma. The study was quite extensive and large, involving more than a total of 700 patients currently suffering from Melanoma, and was contributed to by some of the very best cancer research specialists in the world, with a special focus being put on Professor Julia Newton-Bishop. 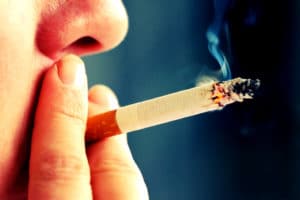 Bishop is the lead author of the study, and says that “the immune system is like an orchestra”, along with “…smoking might disrupt how it works together in tune, allowing the musicians to continue playing but possibly in a more disorganized way.” The results of the study directly suggest and say that smokers and former smokers had a 40% less chance to survive than people who had either never smoked, or not within ten years of their initial diagnosis. A theory that is common among the researchers of the study is that since smokers had a lesser chance of survival, the cigarettes could be directly interfering with the body’s ability to fight Melanoma cancer cells.