Many filmstars from Bollywood and tollywood had joined the Bharatiya Janata Party. Rupa Ganguly, Babul Supriyo, Rimi Sen are the few members of them. Recently the veteran actress Moushumi Chatterjee joined the Saffron party on Wednesday. When she joined the party, the national general secretary and in-charge for West Bengal Mr. Kailash Vijayvargiya and Mukul Roy were present. The general secretary conveyed his opinion that her presence will fulfill the public expectations as well as uplift the party. In 2019 Lok Sabha elections veteran actress may stand and compete for the party. In 2004 Lok Sabha elections Moushumi Chatterjee competed for Congress party from the region of north-east Kolkata. But she was unsuccessful for that time.

The prime purpose of the Saffron party is to establish their power in the eastern region of our country. Famous personalities from various fields had joined a different party, especially the Trinamool Congress party which is led by Chief Minister Mamata Banerjee. It is the prime challenge for the Saffron party to triumph over TMCP in the eastern zone of the country. 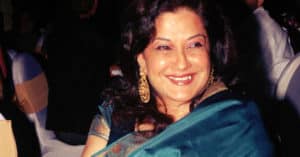 Veteran actress Moushumi Chatterjee was last found in superhit Piku in the year 2016. Besides her, famous actor Amitabh Bachchan, Irfan Khan, Deepika Padukone were also the part of the film. She completed approximately 100 films with flying colors. She was mainly found in Hindi and Bengali films. Since she was born and brought up in Kolkata, her family was related to the film industry and her popularity as a film actress was always high among the public – the Saffron party is trying to win the public support by using her popularity.

After joining the Saffron party, the eminent actress shared that she has deeply come after the path of Sri Narendra Modi and wants to part of this party. She wants to do something for the welfare of the society and spend her spare time in a meaningful manner. But she is incapable to do this work alone. So that she joined BJP to fulfill her dream. She admired and followed the party for a long time, she said.