With the increased number of vehicles all around it becomes more and more difficult for the traffic police forces to maintain the regulations on the road throughout the day. Especially in metropolitan cities like Mumbai, Kolkata, Delhi, and so on, where people lead a super fast and hectic lifestyle. Everyone is always busy and on the move. So, under these circumstances, road accidents due to a violation of traffic norms are very common. To bring a pause on this, Maruti Suzuki India Limited made ties with the Delhi Police and launched a red light and speed violation detection system, to help the police and civilians maintain a better traffic condition on the roads. The project was officially launched on the 26th of February, 2019. The initiative was taken from both the ends aimed at providing more security to pedestrians while they cross the road, also to give the motorists a safe driving experience, and to improve the compliance with road traffic rules. 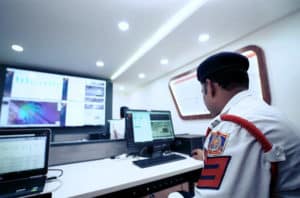 The initiative was launched by Delhi’s Lt. Governor Delhi Shri Anil Baijal along with Delhi’s Police Commissioner Mr. Amulya Patnaik, and Maruti Suzuki’s Chairman R C Bhargava, Managing Director, and CEO Kenichi Ayukawa.  The initiative has decided to have system setups at 9 signalized junctions between Dhaula Kuan & Sarai Kale Khan on Ring Road. The new system has put up sophisticated 3-D radars and over 100 high-resolution cameras to track the presence of vehicles and violation of traffic rules. The cameras capture multiple offenses like the Red Light Violation Detection (RLVD); Speed Violation Detection (SVD), Stop Line Violation, Wrong-Side Violation along with the registration number of the violating vehicle. The system automatically inscribes and transfers the data of violation to the centralized server at Delhi Traffic Police Headquarters in Todapur, near Naraina. The system generates e-challans along with photo evidence and sends it to the violators through SMS/email/post. The system is capable of 24×7 operation and is aimed for the benefit of road users at night. Maruti Suzuki has invested about Rs 16 crore in setting up the entire system.

The Top Features and Benefits of a Demat Account