“No reason for morale down. We are confident and are moving ahead. In 2019, if there is one party which the country trusts and is connected with the people, it is the BJP,” Modi said.

BJP lost power in three key states in December, handing Modi his biggest defeat since he took office in 2014 and boosting the Congress party opposition and its allies ahead of national polls due by May.

Modi said it was more important to focus on his government’s achievements, including the introduction in September of a new healthcare scheme for the poor.

“In such big numbers people suffering, today they have got treatment, how can I consider this a failure. It is my biggest achievement,” Modi said.

He said party has been discussing what it lacked at the state elections but winning or losing was not the only yardstick. The Hindu nationalist BJP was willing to work with regional parties in the run-up to the general election, he said. 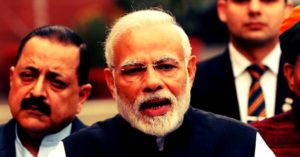 Modi said farm loan waivers should be “definitely done” if it helps but that was not a long-term solution to the problem of farmer distress.

“What is lacking in our system, that farmer becomes debt-ridden and the governments have to repeat vicious cycle of elections and loan waivers. So solution is to empower the farmers. From seed to market, give all facilities to the farmers,” he said.

Farmers’ anger about low crop prices and their sense that the government has done far too little to address them contributed to the state election defeats.

The government is now considering three options for a relief package to help farmers suffering because of low crop prices at a cost of as much as 3 trillion rupees ($43.20 billion), three government sources told Reuters last week.

“The governor himself requested (to resign) because of personal reasons. I am revealing for the first time, he was telling me about this for the past 6-7 months before his resignation. He gave it even in writing. He wrote to me personally”.

Patel resigned after a months-long tussle over policy with the government that raised concerns about the bank’s independence as the next general election nears.

When asked if there was any political pressure on the governor to resign, Modi denied that was the case.

“No such question arises. I acknowledge that Patel did a good job as RBI Governor.”