It was the day of love in the country being celebrated across millennials all over. But the day was darkened by a blot which might never be erased from its midst. On the 14th February, 2019, an army convoy was ripped apart by an unmarked vehicle on the Jammu Srinagar National Highway. The vehicle was laden with close to 350 kgs of explosives right into the incoming convoy killing 42 of the CRPF Personnel on the spot. A video was released sometime later on the internet wherein the responsibility of the attack was taken by Jaish-e-Mohammad, a Jihadist group active in Pakistan.

The army convoy consisted of 78 vehicles that were transporting close to 2500 CRPF Personnel from Srinagar to Jammu on the highway at 03:30 IST. The usual number of jawans travelling in the convoy used to be 1000, but this time there were close 2300+ personnel. At 15:15 IST, a Mahindra Scorpio was driven in by a militant named Adil Ahmad Dar a.k.a. Adil Ahmad Gaadi Takranewala alias Waqas Commando. He was a Jaish militant who went active a year ago and a video was released denoting the assailant name and have also claimed responsibility of this dastardly act. 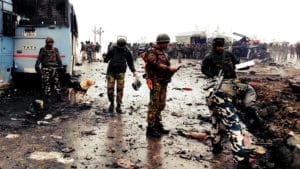 This is the deadliest attack on the Indian Army since 1989, and the attacks have been condemned by all of the countries around the world. Even the United Nations has strongly condemned and also proclaimed that they stand by India in these times. The Prime Minister of India, Mr. Narendra Modi has made it clear that this will be the final straw in the haystack. He also went on to say, that he understands the sentiments of the Country, and the Army has been given a “free hand” in taking whatever measures they deem fit to correct this slight.

The Government of India has already dispatched a team of the National Investigation Agency consisting of 12 key personnel to probe the attack at Pulwama. Minister of Home Affairs, Mr. Rajnath Singh also commented that every possible action would be taken, and Pakistan will pay the price for this atrocity.