Social activist Anna Hazare today ended his six-day fast at Ramlila Maidan here, saying he has been assured by the government that appointments of Lokpal at the Centre and Lokayuktas in the states would be made soon.
Hazare said that he was giving the government six months time till August to come good on its assurance and warned that his protest will again begin in September if the demands were not met.

The 80-year-old anti-corruption activist’s demands include the appointment of Lokpal at the Centre and Lokayuktas in the states, and giving better prices to the farmers for their yield.
‘They (government) have assured us that they will make the appointments as soon as possible. It should be done within a time frame. Chief Minister of Maharashtra Devendra Fadnavis has said that it will not even take six months, we will see,’ Hazare said.

‘janta aur sarkar alag nahi hoti- janta ki bhalai sarkar ka kaam hai, desh ki bhalai- aese andolan ki naubat nahi aani chahiye (the government and the public are not separate. The government’s job is to do what is good for the people and the country. Things should not come to such a pass that protests are needed),’ he said. 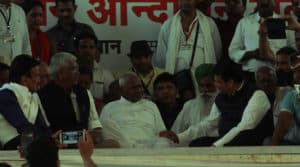 Meanwhile, a man hurled a shoe towards the stage where Hazare, Fadnavis and Union minister Gajendra Singh Shekhawat was present, but it was not clear as to whom it was aimed at.

After his meeting with Fadnavis, Hazare said the government had come forward with a concrete plan to resolve issues he had regarding Lokpal and lokayukta, as well as addressed his concerns regarding farmers. ‘I’m satisfied with the assurances given in the meeting with the CM and have decided to call off my fast, he said later.

The state and Union governments were discussing the demands with Hazare for the last two days but had failed to convince the 81-year-old social activist. On Tuesday afternoon, Fadnavis arrived in Ralegaon Siddhi accompanied by Union agriculture minister Radha Mohan Singh and junior minister for defence Subash Bhamre. They held a closed-door meeting with Hazare, discussing his demands regarding Lokpal and lokayukta and agrarian issues.