Never in the wildest dreams we would have thought that this would happen. A squad that boasted of versatility and experience were handed an 80-run defeat by the Kiwis in their worst ever T20 International defeat at Wellington today.

The Kiwis opened up the innings with Tim Seifert and Colin Munro who proved to be too lethal for the Indian bowlers to handle. Seifert punished the bowlers to the core scoring a wonderful 84 runs in 43 balls. Skipper Kane Williamson scored 34 off 22 balls whacking 3 sixed off the Indian deliveries.

By the end of the 20th over, New Zealand sat pretty on 219/6 leaving the Indians with a daunting task of chasing down the massive total which rarely happens. The Indian openers fell apart yet again which is a cause of concern for the team. By the end of the powerplay, both Rohit Sharma and Shikhar Dhawan were walking out of the crease after being taken out by Southee and Ferguson respectively.

Former Skipper Mahendra Singh Dhoni kept the team’s hopes alive by top scoring with 39 off 31 balls studded with 5 boundaries and a six. But the wickets were tumbling like clockwork as time passed by. Vijay Shankar looked gritty on the crease as he scored 27 off 18 balls but he was packed off shortly after Rishabh Pant went off crease by Mitchell Santner. 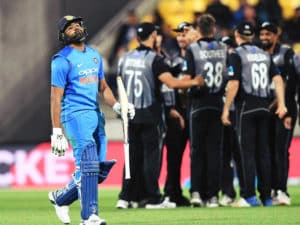 India were therefore bowled out at 139 which was a definite shocker and the team needs a serious revamp if they need to win the next 2 T20I. In the post-match presentation, Sharma pointed out the fact that they fumbled in their bowling and batting both, and failed to capitalize on the opportunities that came before them.

New Zealand on the other hand were brilliant on both bat and ball showing an all-round performance throughout the game. Southee scalped 3 wickets in 17 runs off 4 overs, Ferguson, Santner and Sodhi each got 2 wickets while Daryl Mitchell took the lone wicket of Yuzvendra Chahal.

It is time for introspection on the team’s part as a lot of things need to be worked on for their coming T20I at 08th February at Eden Park.