The political circles were abuzz on Wednesday with one topic only. It was the formal induction of Priyanka Gandhi Vadra into the world of politics. The sister of Congress president Rahul Gandhi was made the All India Congress Committee (AICC) General Secretary for Uttar Pradesh East. The move is surely a major one coming ahead of the Lok Sabha elections and has added spunk to the Congress cadre in Uttar Pradesh which was feeling left out after the BSP-SP coalition was announced a while ago.

The ‘Bua-Bhatija’ combine of Mayawati and Akhilesh Yadav is a formidable one in Uttar Pradesh and the Bharatiya Janata Party (BJP) has publically agreed that it would make things tougher for them when it comes to winning Lok Sabha seats in the Hindi heartland. The two rival parties have in the past traded barbs, calling each other corrupt and criminal infested but given the scenario where they see the BJP as a bigger threat to them being in power, they have become strange bedfellows.

Enter the ‘Bhai-Behen’ duo of Rahul Gandhi and Priyanka Gandhi Vadra and the equation becomes infinitely more complex. From being reduced to an ‘offer’ by the SP-BSP alliance to contest on the two seats of Raebareli and Amethi, Congress has announced with emphasis that it still remains the biggest player in the Uttar Pradesh politics when it comes to ‘checking’ the BJP in Lok Sabha polls. 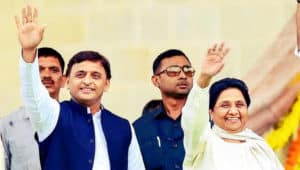 Soon after the Wednesday announcement was made, Rahul Gandhi was firm in his words when he told reporters that the Congress party has never played on the back foot, neither in Gujarat nor in Uttar Pradesh. The confidence of the Congress president is not unwarranted – Priyanka Gandhi Vadra is a big crowd puller and has the charisma that appeals to the masses of Uttar Pradesh.

However, one could argue that the ploy to forge an alliance spelled disaster for SP and Congress in the 2017 elections where they were left red-faced despite having ‘secured’ a large vote base in theory. It is difficult to predict where the Uttar Pradesh voter might lean with the Ram Mandir issue hitting the crescendo. The cow lynching violence and other sporadic events might bolster the Congress, SP, and BSP with voters looking at the ‘development and inclusivity’ poll cry of the Opposition.

Whatever the outcome may be, it is surely not going to be a cakewalk for any of the big players in the political arena of Uttar Pradesh.