The 63-year-old widower, also former defense minister of India, left behind his two sons and a grandchild.

His death leaves India’s smallest state with a coalition government under considerable strain.

Parrikar had quit as the Union defense minister in March 2017, to return as the chief minister of India’s smallest state. He wanted to hold together the ruling coalition after its constituents refused to accept anyone else as its leader. Since then he stayed on in the job despite his deteriorating health, reflected his indispensability to the Bharatiya Janata Party (BJP).

In the past two decades, as far as Goa was concerned, Parrikar was the BJP representative as well as an excellent leader. But while the state saw a degree of political stability when he was on the ruling seat, Parrikar was destined never to complete a full term as chief minister.

His first term, which began in October 2000, lasted for 16 months and the second, from June 2002, was for two years and eight months. He began his third in 2012, having led the BJP to its biggest ever victory, giving it a majority on its own for the first time.

Parrikar even declared that it would be his last term as the chief minister and as an elected representative.

Parrikar considered himself a nerd at finding solutions to problems, particularly economic and accounting ones. Even though he would listen to people, his word would be final. 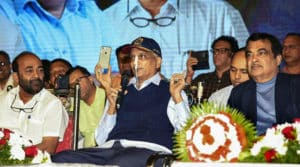 Midway through his third term, in November 2014, Parrikar had been summoned and entrusted with the responsibilities of the defence ministry. There was a desperate need for a credible face, quick and transparent decision making in the ministry.  Parrikar, a fierce nationalist, fit the bill. It was the first time that a son of Goa had occupied such a high office.
As the defence minister of the country, he sought to free defence procurement from being attacked by rival manufacturers, pursue realistic ambitions and prioritise operational readiness of the armed forces. The armed forces also conducted surgical strikes across both frontiers during his tenure.

But a true Goan, he missed his fish curry and rice, and that’s why whenever he got the chance he would head back to Goa.

This would cast a shadow on Parsekar, who had replaced him as chief minister, and end up costing the BJP. The mandate against the Parrikar-Parsekar government would reduce the BJP to 13 seats in the 2017 assembly polls. Without Parrikar, the BJP just could not pull up enough public support.

Parrikar would return, “taking moral responsibility,” leading an odd coalition of divergent interests to form the government. The only thing holding them together, since March last year, was Parrikar.