Asia’s richest man Mukesh Ambani today paid a visit to Siddhivinayak temple along with wife Nita Ambani and younger son Anant to offer the very first wedding invitation card of his elder son Akash and Diamond king Russell Mehta’s younger daughter Shloka Mehta. Akash and Shloka are friends since childhood and in presence of their friends and family, Akash proposed to Shloka in Goa. The much loved couple got engaged in July, 2018.

Today Mukesh and Anant were seen wearing white shirts and black pants when Nita was as usual looked sizzling in a red and yellow kurta designed with golden threads and a pair of red palazzos. She completed her look with diamond jewelleries and her beautiful smile. She looked absolutely ravishing in that low key makeup. Later Anat and Mukesh were seen roaming around the temple premises. They prayed to the God and offered the first invitation card.

Their union and marriage assumptions are doing rounds since then. Every entertainment portals and blogs have been discussing their attires and every itinerary in details. This highly acclaimed couple is all set to tie the knot in March next year. Ambanis hosted a huge and lavish engagement party later in Mumbai where eminent persons from all over the world were present. The lovey dovey couple were last seen in beautiful location Lake Como where they were attending Mukesh Ambani’s daughter Isha’s engagement ceremony. 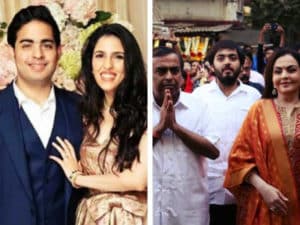 Isha, one of the board of directors of Reliance’s big project Jio got engaged to Ajay Piramal’s son Anand Piramal. The couple later got married in December 2018 in a lavish wedding at Antilia, the Ambani residence in Mumbai. Ambani’s threw a huge lavish party and the party was attended by all the high end politicians, bollywood stars and big industrialists. The pre wedding festivities took place in Udaipur and the Beyonce, the pop sensation performed there.

Akash and Shloka performed at Isha’s sangeet ceremony and grabbed the eyes of spectators. The big day is set to be February 23rd, 2019. Three days of pre wedding festivities are going to take place in the very beautiful location St. Moritz, Switzerland.