State Bank of India (SBI) said on Thursday lenders to Jet Airways Ltd are considering a plan to resolve the airline’s debt issues, amid a swirl of media reports indicating the carrier’s main shareholders are yet to resolve differences.

Jet’s chairman, Naresh Goyal, said in a letter to the SBI chairman he is willing to invest 7 billion rupees ($98.48 million) in the airline and pledge all his shares but wants to retain a 25 percent stake in the carrier he founded, TV channels reported on Thursday.

Goyal’s offer came after Jet’s 24 percent shareholder Etihad Airways told the bank in a separate letter it would buy more shares and immediately pump $35 million into the troubled carrier if Goyal steps down from the board and cuts his stake to 22 percent from 51 percent, according to reports.

Goyal and Jet did not immediately respond to requests from Reuters for comment.

Jet controls over a sixth of a India’s aviation market that is experiencing an unprecedented boom in air travel. Yet high fuel taxes, a weak rupee and price competition have squeezed profitability, leaving Jet with $1.13 billion in net debt as at the end of September and defaulting on payments.

The airline owes money to banks, employees, vendors and lessors – some of which are exploring taking back aircraft after crisis talks with the cash-strapped airline failed to ease a row over late payments, sources previously told Reuters.

Representatives of Jet and Etihad were due to meet creditors, led by SBI, in Mumbai on Wednesday to discuss a proposal that involved Etihad increasing its stake, a person familiar with the matter previously told Reuters. The outcome of the meeting is not known. 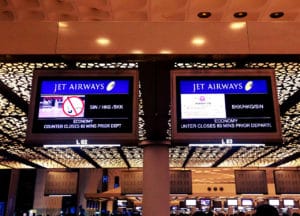 “SBI would like to state that lenders are considering a restructuring plan under the RBI framework for the resolution of stressed assets that would ensure long-term viability of the company,” the state-owned bank said in a statement on Thursday, referring to the Reserve Bank of India (RBI).

SBI’s statement elaborates on comments made by Jet on Wednesday, in which the airline said a plan, involving a cash injection by stakeholders and board changes, was under discussion.

The bank, in its statement, said any resolution plan would be subject to clearance by the central bank, market regulator and the civil aviation ministry, as well as approval from the airline’s board and all of its lenders.

The latest statements from SBI and Jet came after another news channel, CNBC-TV 18, reported on Wednesday that Etihad had offered to buy Jet shares at a 49 percent discount to their trading price and immediately pump $35 million into the troubled carrier, citing a letter to SBI from the Abu Dhabi airline’s Chief Executive Tony Douglas.

India’s civil aviation secretary, R N Choubey, told reporters on the sidelines of a conference on Wednesday that ownership and control of Jet would need to remain in domestic hands.