Gold traded in a tight range on Monday, hovering below a more than one-week peak hit last week, as the dollar firmed and poor U.S. jobs data increased concerns about a slowdown in global economic growth.

It rose 1 percent on Friday, in its biggest one-day gain since Feb. 19.

The dollar rose 0.1 percent against major currencies and traded close to a near three-month peak registered in the previous week, making gold costly for holders of other currencies.

“The fall this morning is a temporary occurrence due to some early morning profit taking after Friday’s move up. The U.S. dollar is mostly stronger and that is adding some downward pressure on gold,” said Jeffrey Halley, a senior market analyst at OANDA.

“Structurally gold is well positioned to move higher over the coming months. As the world economy continues to slow and uncertainty increases, it is going to be supportive for gold.”

Gold is often seen as an alternative investment during times of political and financial uncertainty.

Limiting gold’s losses, however, were weaker equity markets, which struggled for traction after U.S. employment data on Friday raised doubts about the strength of the global economy. 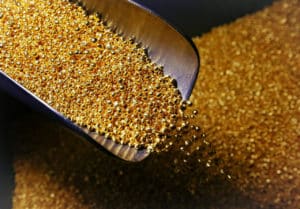 The U.S. economy created only 20,000 jobs in February, the weakest since September 2017, adding to signs of a sharp slowdown in economic activity in the first quarter.

“Bullion’s appeal though dented by robust U.S. dollar prospects will stand tall amidst a decelerating global economy in 2019,” Phillip Futures said in a note, adding gold would stay firm as the United Kingdom prepares for key votes on the Brexit deal.

UK is due to leave the European Union on March 29, with parliament expected to reject Prime Minister Theresa May’s deal in a vote on Tuesday. Britain will face an economic shock if it leaves without a deal.

Meanwhile, speculators slashed their net long position in gold in the week to March 5, to its lowest in over a month, the U.S. Commodity Futures Trading Commission (CFTC) said on Friday.

Delta Corp – Will They Join The Growing Sports Betting Scene?