Gold prices held steady on Monday, near a seven-month peak scaled in previous session, on hopes the U.S. Federal Reserve will keep interest rates unchanged during its two-day policy meeting later in the week.

The Federal Open Market Committee meets between Jan. 29 and Jan. 30, and Chairman Jerome Powell is widely expected to acknowledge growing risks to the U.S. economy as global momentum weakens.

“Gold is having a very positive macro stance in the sense the U.S. Fed is going to be more accommodative along with the European Central Bank, which is seeing downside risks to the economy,” said Edward Moya, market analyst at OANDA.

The Fed raised interest rates four times last year and has signalled it will probably lift borrowing costs twice in 2019, though some central bank officials have said they will be patient in raising rates.

ECB President Mario Draghi warned last week that a dip in the euro zone’s economy could be more pronounced, comments seen as signalling a delay in the bank’s first interest rate hike.

Gold tends to appreciate on expectations of lower interest rates, which reduce the opportunity cost of holding non-yielding bullion.

Meanwhile, Asian stocks advanced on Monday as Wall Street rallied after a deal was announced to reopen the U.S. government following a prolonged shutdown that had shaken investor sentiment. 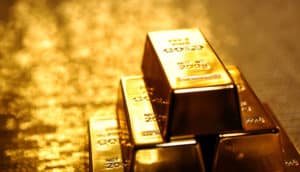 The shutdown had added to the worries of investors who were already concerned over slowing global growth, signs of stress in corporate earnings and a still unresolved Sino-U.S. trade war.

“While the shutdown concerns are alleviated now, the long- term play is really uncertain,” Moya said.

Spot gold rose 1.8 percent on Friday, notching up its best one-day percentage gain since Oct. 11, hitting its highest since June 14, 2018. The metal also broke above the psychological level of $1,300 after failing multiple times due to strong technical resistance.

“With a breakout of sorts now evident on the gold charts, there could be further upside room for the precious metal,” INTL FCStone analyst Edward Meir said in a note.

“The Fed meeting this week could be instrumental in triggering more dollar selling as well, as could positive Brexit developments, which is why we would stay long gold going into the week.”