In a match where nobody could reach 30, Wyatt scored an unbeaten 64 (55b, 6×4) to lead England not just to a five-wicket win, but to the series victory as well. Danielle Wyatt had made her international debut against India’s Women team, and last year she hit a sensational 124 off 64 balls in a T20 match in Mumbai. The visiting side has taken an unassailable 2-0 lead with a match to spare. Though England was chasing a modest target of 112, it wasn’t exactly cruising along; against India’s four-pronged spin attack. They were in some trouble too, when captain Heather Knight was trapped leg-before by left-arm spinner Ekta Bisht, leaving them at 56 for four.

But in Lauren Winfield, Wyatt found some support. They calmed the nerves in the English dressing room and frustrated the Indian team. Leggie Poonam Ydav, left-arm spinner Radha Yadav and off-spinner Deepti Sharma had bowled their hearts out, but the runs on the board weren’t enough. Radha had provided the breakthrough by cleaning up Tammy Beaumont, England’s star in the first match. Then, Poonam caught Amy Jones off her own bowling. Ekta, whom India had surprisingly omitted in the last match, trapped Natalie Sciver in front of the stumps. 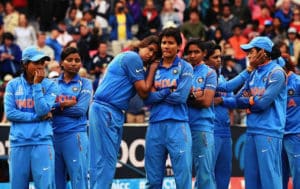 Wyatt used her feet beautifully against the spinners and played some fine shots on the off-side. But none of those strokes could invoke as much awe as the two sixes smashed by Indian captain Smriti Mandhana earlier in the day, after Knight put the host in. The elegant left-hander lifted the first ever ball she faced over long-off. The last ball of the over, bowled by seamer Anya Shrubsole, was dispatched over long-on.

But, it didn’t last long. Smriti’s attempt to drive medium-pacer Katherine Brunt in the very next over resulted in a thick outside edge to the ‘keeper. Jemimah Rodrigues was guilty of being too ambitious; she fancied a big heave over the leg-side against the same bowler and lost her off-stump. It indeed was a fine spell from Brunt, who varied her pace well to finish with three for 17 from four over. Left-arm spinner Linsey Smith, who took two for 11, impressed yet again.

Mithali Raj pitched in with 20 handy runs, but for a couple of fours from debutant Bharati Fulmali towards the end, India may not have reached 100.