Actor Prakash Raj, who recently announced his decision to contest in the 2019 Lok Sabha elections, said on January 18 that he would never join any political party as the parties were not honest.

Mr. Raj said he had decided to contest as an independent from the Bengaluru Central constituency as he “cannot stay in any party for more than three months”.

Early at the press conference in Bengaluru, he said: “I want to be the voice of the people,”.

The actor, who has been politically active ever since the murder of journalist-activist Gauri Lankesh in Bengaluru on September 5, 2017, announced his foray into politics more than a fortnight ago.

Asked whether the anger with which he had taken a plunge into politics would help him, he said, “There should be anger against dishonest people.” Known for his anti-BJP stand, Mr. Raj distanced himself from the present turmoil in the Congress-JD(S) coalition government in Karnataka over alleged attempts to dislodge it by the saffron party.

“At the time of [the May 2018 Assembly] elections, I knew whom I am opposed to, but did not support anyone.I have no connection with their squabbling,” he said.

“The BJP is a bunch of shameless people. They call themselves gau bhakts [cow devotess] but on an important festival of worshipping cow [Makar Sankranti], they camped in a resort in Delhi instead of being at home,” he said. 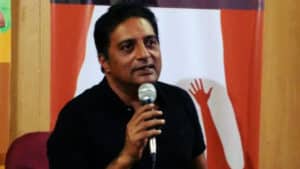 The BJP MLAs from Karnataka were camping in a luxury hotel in Gurugram, a move the party has defended, saying it was to protect their lawmakers from poaching attempts by the ruling coalition in the State.

To a question, Mr. Raj said he was not averse to joining the ”mahagathbandhan”, the alliance of anti-BJP parties.

He decided to contest the election from Bengaluru Central because he grew up in the area where the electorate was secular in nature.

The seat is presently held by the BJP’s P.C. Mohan.

Mr. Raj earlier claimed that Bollywood filmmakers stopped offering him roles as he has been critical of the Narendra Modi government.