Sunil Chhetri starred for India in their AFC Asian Cup 2019 Group A opener at the Al Nahyan Stadium in Abu Dhabi on Sunday as his double helped the team hammer Thailand 4-1.

Chhetri’s goals in either half also helped him go past Argentina great Lionel Messi and become the second highest active international goal scorer behind Cristiano Ronaldo of Portugal. The India striker now has 67 goals while Messi has 65.

The Blue Tigers also registered their biggest win in the tournament and also their first in the Asian Cup since 1964.

Sunil Chhetri broke the deadlock with a penalty in the 27th minute before Teerasil Dangda gave Thailand hope with an equaliser. The joy did not last long as Chhetri struck again soon after the break with an excellent first-time strike to restore India’s lead.

Anirudh Thapa extended the lead in the 68th minute and Jeje Lalpekhlua scored after coming off the bench to be part of a historic win for India. 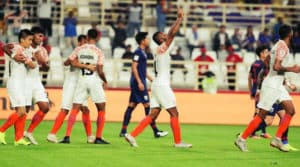 Thailand had the upper hand in the opening stages of the match but the Indian defense and Gurpreet Singh Sandhu were alert to their opponents’ clever movements off the ball in the attacking third.

Full-back Tristan Do’s set-piece skills threatened to break the Indian resistance in the 21st minute. Gurpreet, though, managed to deflect the ensuing shot and Anas Edathodika was at hand to clear the danger.

A quick throw-in by Chhetri from the left flank in the 26th minute caught the Thailand defenders unaware and Ashique Kuruniyan surged into the box with his eye firmly on the goal. Theerathon Bunmathan, in a desperate attempt to halt the FC Pune City winger’s run, handled the ball inside the box and conceded a penalty. Sunil Chhetri stepped up and converted to score his third AFC Asian Cup goal.

Thailand head coach Milovan Rajevac sought a response from this team and the War Elephants hit back in the 33rd minute. Bunmathan made amends for his mistake at the other end with a peach of a free-kick delivery into the box from the right flank. Teerasil Dangda leaped high in the centre of the box and placed his header past Gurpreet.