A string of Hong Kong-listed stocks plunged without warning in afternoon trading, the latest shock losses to sideswipe investors in the world’s fourth-largest equity market.

Jiayuan International Group Ltd., Sunshine 100 China Holdings Ltd. and Rentian Technology Holdings Ltd. fell over 75 percent in a matter of minutes and at least 10 companies were 20 percent lower or more by the close, wiping out HK$37.4 billion ($4.8 billion) in market value. Most of that came from Jiayuan, which lost HK$26.3 billion on record volume.

“Some of these companies might have cross-shareholdings in each other and when one of those starts to tumble, it brings down other related stocks,” said Hao Hong, chief strategist with Bocom International Holdings Co. “It’s likely more similar stock crashes could happen this year. A lot of share pledges in Hong Kong are underwater, and as soon as the positions are liquidated it triggers an avalanche.”

An “Enigma Network” of 50 stocks roiled the city’s markets in 2017, triggering a crash in dozens of interlinked companies weeks after activist David Webb published a report. In November, more than $1.4 billion was wiped from the value of five small-cap stocks as they tumbled.

“People should check the share pledges to see if a stock could suddenly be sold off,” Webb said Thursday. 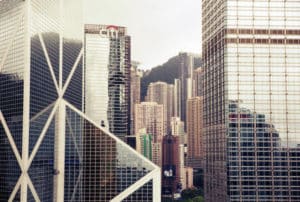 Hong Kong exchange rules say a controlling shareholder can borrow against stock and not disclose as long as it’s for personal finance reasons rather than loans, guarantees or other forms of support for the company.

Some traders pointed to Jiayuan’s $350 million of maturing debt. In a statement Thursday, the company said it has fully repaid the notes, its financial condition is healthy and operations are normal.

Another connection: Gu Yunchang is a board member for both Jiayuan and Sunshine 100, data compiled by Bloomberg show.

In the fourth quarter, Jiayuan sold $400 million of bonds that mature in October 2020. Those securities fell 30 cents to a record low of 70 cents on the dollar as of 4:25 p.m. Hong Kong time, according to Bloomberg-compiled prices. The turmoil rippled through to the market for investment-grade Chinese dollar bonds, where spreads were about 2 basis points wider, traders said.

Also announced Thursday was the scrapping of a 500 million yuan bond ($74 million) sale by Jiayuan Chuangsheng Holding Group, a company beneficially owned by the chairman of Jiayuan International, according to a December filing.

“No one really knows what’s going on here,” said Castor Pang, head of research at Core Pacific-Yamaichi International. “For common investors, it’s a very surprising and tough situation as there was no time to get out.”