Samsung is building all hypes for its unparalleled Galaxy 10 series. The flagship phones Galaxy 10, Galaxy 10+ and Galaxy e have garnered the eyes of the enthusiasts all over the globe. People are gawking at the high end, stylish smartphones coming straight out of the house of Samsung. The craze for this company has been in the air since its inception and now it is going to launch the first ever foldable smartphone on earth. February 20 is going to be one of the most exciting, eventful and amazing day in the history of smartphones. Galaxy fold is going to change the face of smartphones forever. Along with these smartphones, Samsung is bringing forth Galaxy Buds and Galaxy watch Active. 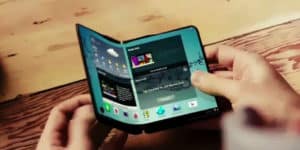 Samsung showcased this massive invention to some selected people last year and all videos and photos were restricted in that event. But a small video footage got leaked and from that we got to know that Galaxy fold has a 7 inch smart display when it is unfolded. User can use the product as a tab. The smart AMOLED display can also be folded into a 4 inch smartphone and that phone can be used as a graspable smartphone.

Initially this phone is going to be manufactured as a limited edition with only 1 million across the world. If the response from the buyers come positive, then it will be a regular model available in more quantities. The chip used in this smartphone is expected to be Exynos 9820 or Snapdragon 855. The internal memory offered is almost similar to a laptop; 512 GB! This beauty costs around $1800 which is around INR 128,000. The phone will consist two separate 2190 mAh batteries and together it gives a huge 4380 mAh capacity. Though the hype is going high, it is still not confirmed whether the phone is going to get launched in India or not!