The Australian Open quarterfinals witnessed some great matches when Novak Djokovic earned a 6-4 6-7 (5-7) 6-2 6-3 victory on the match that he played against Russia’s Daniil Medvedev. The match was really intense where the 32 years old Novak outlasted the 22 years old Medvedev in the 3 hours and 15 minutes match. It was seen that during the match, Medvedev struggled physically and after some time he grew really frustrated seeing himself pay the prices for taking only two out of the nine breakpoints. He continued his resistance till the end as he saved two match points until Novak took the third with a really beautiful win.

Novak Djokovic who is a six-time champion would play Nishikori in the last eight, who has defeated Spain’s player Pablo Carreno Busta in a very controversial match that occurred for around five hours and the results of which was decided in a super tiebreaker. 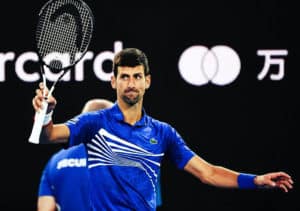 There has been serene progress to the last 16 for Novak Djokovic keeping aside the victory that he got previously over Denis Shapovalvo, the Canadian teenager. But Medvedev, who is one of the rising stars and has currently been in a very good form to have reached the finals of the Brisbane International, was expected to give a much tougher fight to Djokovic for the win. The match basically became a durability test as the players pushed each other in the long physical stress in which two containing more than 40 shots also existed. The conditions became really stuffy in the Rod Laver Arena and it was witnessed that Medvedev was the first one to get a bit more tired in the third set. There were suspicions going around that Medvedev is saving the energy for the fourth set, however, Djokovic maintained his consistency which leads him towards his joyous victory. Djokovic admitted that the match was truly a physical battle. He also added that this was that kind of match where players have to stick around and wait for the correct opportunities.