Delhi’s air quality showed an “unusual” improvement due to increased wind speed, favourable for dispersion of pollutants, and settled in the “poor” category.

The overall air quality index (AQI) was recorded at 262, which falls in the “poor” category, according to the Centre-run System of Air Quality and Weather Forecasting (SAFAR). 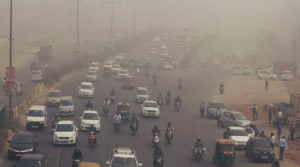