Union Minister Ravi Shankar Prasad has said the government will soon make it mandatory for linking Aadhaar with driving license.

Delivering his presidential address at the ongoing 106th Indian Science Congress at Lovely Professional University here, the minister for Law, Electronics and Information Technology said, “We are soon going to bring a law which will make it mandatory to link Aadhaar with driving license.”

Explaining the need for the linkage, Prasad said, “At presently, what happens is that the guilty person who causes an accident flees the scene and gets a duplicate license. This helps him go scot-free. However, with the Aadhaar linkage you can change your name but you cannot change your biometrics, neither iris nor fingerprints.”

So, the moment one goes in for a duplicate license, the system will say this person already has a driving license and should not be given a new one, the IT minister added.

Eulogising about the Centre’s ‘Digital India’ programme, the minister claimed that it had bridged the urban-rural divide. 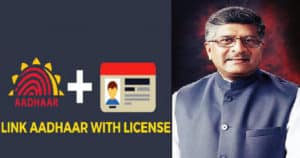 Through a power presentation, Prasad said, “This is a digital profile of India — 123 crore Aadhaar cards, 121 crore mobile phones, 44.6 crore smart phones, and 56 crore internet users. There has been a 51 per cent growth in e-commerce. India has a population of 130 crore.”

He also said that the digital payment transactions in the country have increased manifold to over Rs 2,070 crore in 2017-18.