Wall Street advanced in low-volume trading on Monday as revelers gathered to ring in 2019, marking the end of the worst year for U.S. stocks since 2008, the height of the financial crisis.

Wall Street entered correction territory in late January and was challenged for much of 2018 by tariff jitters, rising interest rates, and fears of diminishing corporate profits.

“Investors got complacent,” said Thomas Martin, senior portfolio manager at Globalt Investments in Atlanta. “People were positioned for the lack of volatility, and when that changed because of trade concerns and interest rates, people started repositioning and that started the cascade.”

December was a particularly trying month for U.S. equities. The S&P 500 .SPX saw its worst December since the Great Depression and the Nasdaq .IXIC confirmed it was in a bear market, or 20 percent below its high. All three are down about 9 percent since the beginning of the month.

In the new year, investors hope for the removal of question marks that acted as significant headwinds in 2018, including U.S.-China trade negotiations, the path of U.S. Federal Reserve interest rate hikes, slowing corporate growth and economic fallout from the upcoming departure of Britain from the European Union, or Brexit, among other concerns.

As 2019 gets underway, “investors will be looking to corporate earnings, what happens with the trade negotiations and the body language of the Fed,” Martin added. 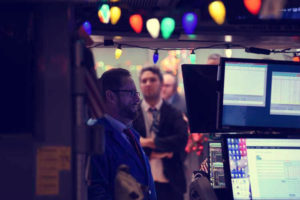 On Monday, renewed hopes for a resolution to the U.S.-China trade dispute provided a glimmer of optimism for investors.

U.S. President Donald Trump indicated on Twitter that progress had been made toward a potential settlement of trade tensions between the United States and China which have plagued stock markets for much of the year.

Trading volume was relatively light, owing to the holiday as the U.S. federal government shutdown entered its 10th day.

All 11 major sectors in the S&P 500 ended the session in positive territory. But for the year, only healthcare and utilities .SPLRCU ended 2018 higher.

Energy .SPNY, materials .SPLRCM, communication services .SPLRCL, industrials .SPLRCI and financials .SPSY were the biggest percentage losers of 2018, down between 14.7 percent and 20.5 percent from the beginning of the year.

The 20.5 percent drop of energy stocks in 2018 was largely attributable to crude prices LCOc1 plunging 38 percent since early October.

Advancing issues outnumbered declining ones on the NYSE by a 2.42-to-1 ratio; on Nasdaq, a 1.81-to-1 ratio favored advancers.

Volume on U.S. exchanges was 7.46 billion shares, compared with the 9.22 billion-share average for the full session over the last 20 trading days.

What is Zero Depreciation Cover for Two-Wheeler Insurance