Moving up from his spot by three places, now at the 17th spot, the stumper MS Dhoni scored 51, 55 not out and 87 not out and proved to play a very vital role in the very first victory of India’s bilateral series in the Australian country. For his 191 runs from the three ODIs against Australia, MS Dhoni was adjudged the Man of the Series. India now surpassed New Zealand as well as Australia and has currently moved to the second place in the team ranking with 122 points. 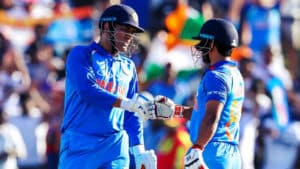 Along with MS Dhoni, Kedar Jadhav also moved up 8 places to 35th position in the ICC rankings for batsmen in ODIs. The Top 10 in the ICC rankings for ODI batsmen has been continued to be dominated by the Indian cricketers. The Indian captain, Virat Kohli, continues to remain at the 1st position with 887 points. Rohit Sharma, who stood in as Indian captain due to the absence of Kohli for the last two ODIs against New Zealand, is at the second position with 854 points. His opening partner, Shikhar Dhawan, dropped two places and is now at the 10th position in the list with 744 points. Now, India has four of its best batsmen in the top twenty.

Apart from batsmen, India has its fair share of bowlers on the list as well, with Jasprit Bumrah holding his first position with 808 points despite missing both the series in Australia and New Zealand. The leg-spinner Yuzvendra Chahal is up one place in ICC rankings for ODI bowler and is now at the fifth position below Kuldeep Yadav with 709 points after taking nine wickets against New Zealand. Fast bowler Bhuvneshwar Kumar is up by six places and is in the 17th position.

Why Betting on Cricket is Worth Giving a Shot?

Why is Change Management Important?