According to Forbes 2019, World Billionaires List, the Reliance Chairman, Mukesh Ambani’s wealth surged USD 40.1 billion in the year of 2018 which jumped six positions forward up to the rank 13 on the Forbes World’s Billionaires list with almost about a net worth of USD 50 billion.

While on the other hand, we see that Amazon founder Jeff Bezos again topped the list as the wealthiest man of the world with a net worth of USD 131 billion.

This 61-years old, Chairman and Managing Director of the Reliance Group of Industries run $60 billion revenue  i.e. oil and gas among the most valuable companies. Ambani, therefore, leads the 106 billionaires from India on the Forbes list of billionaires.

Besides, the financial magazine further mentioned that Jio has signed almost 280 million customers by offering free domestic voice calls, cheap data tariff plans and as well as virtually free smartphones. Undoubtedly, it is not a surprise that Ambani is way ahead of the 105 billionaires from India on the list of Forbes. 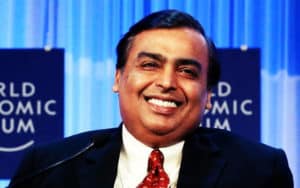 Next in the list is the Wipro Chairman, who ranked 36th with a net worth of $22.6 billion followed by the HCL co-founder (82nd rank) and Arcelor Mittal Chairman and CEO (91st rank). Meanwhile, the younger sibling of Mukesh Ambani, Anil Ambani was ranked 1349 on the list with about a net worth of USD 1.8 billion.

Guide to Buying a Webcam for Streaming